Pruning rose bushes is not difficult. You just have to know when and how!

When To Prune Roses

There are those that prune roses in the Fall to neaten them up for the winter. However, that is the not the best time for pruning. Once you have cut a stem, it forces new growth and you do not want this just before the winter.

The best time for pruning roses is in the early spring.

How To Prune Rose Bushes

I like to keep things simple. I favor shrub roses, such as "Carefree" Rose varieties such as Carefree Delight and also "Knockout" Roses. I'll discuss the pruning for these types of roses, also known as shrub roses or landscape roses. Here is the easy way to prune. 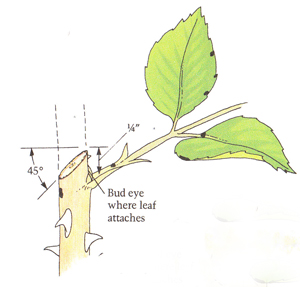 These shrubs are repeat bloomers. After any flushes of flowers, you can do some dead heading. You can also help your roses along for the next "flower burst" by trimming them back a bit. It's best at these times (after flower flushes) to cut back to just before the first five leaflet. Here, you will see five leaves emerging instead of three or so. By doing this, more stems and flowers are forced and produced. (If for some reason you want to go back further to right before a five leaflet further down on the stem, that's ok.)

Some rose bushes produce rose hips in the fall. These look like fruits and are very attractive. Rugosa Roses are well known for this. I would see their beautiful hips late summer and early fall down at seaside areas. If your rose variety produces hips, you may want to hold off on any pruning rose bushes or dead heading towards the end of the season or you will be cutting off the spent flowers where hips are formed. However, if you don't care about the hips and would rather enjoy rose bushes with fall flowers, just trim as mentioned above.